Thought I’d post some photos from the Mayday festival “Jack in the Green” A wonderful pagan festival that Hastings puts on, but in its usual “dark style”. They symbolically slay Jack to mark the beginning of summer. Quite often Morris Dancers are dressed in black with top hats and big ravens hovering, instead of the usual white outfits with ribbons. Its a strange affair, because while everyone is behaving like hippies, we also have an invasion of bikers. Heaven knows how many thousands arrive on the Monday, all to pose and look at the other wondeful bikes. So in the Old Town, you get scenes where the big hairy bikers are sitting drinking on one side of the road and the green haired, flower power, bell tinkling, pagan hippies, drumming on the other.

So of course it was the perfect place to arrive with a fake child!

I dressed in green as a pagan and dressed my doll in the same headdress, but as a green fairy. No one batted an eyelid. So many weird things happen on that day that I just looked like I was part of something that would be happening later. One biker started to say how beautiful my daughter was, then realised, when she saw a hand had dropped off, that she wasn’t real.

I went up to the castle and had a surreal conversation with those at the entrance as to whether I should pay an entrance fee for her. They were definitely getting into the spirit of things! (They let her in for nothing).

One guy got a terrible shock, when another reveller (who realised she was a doll) jumped over her. He was really upset, mostly by our lack of reaction to it. So was very relieved when we explained.  He’s the ginger haired guy sitting behind us, with the fantastic beard. 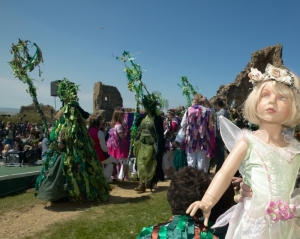